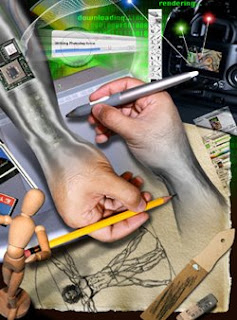 A mindfile is the sum of saved digital reflections about you. All of the stored emails, chats, texts, IMs and blogs that you write are part of your mindfile. All of the uploaded photos, slide shows and movies that involve you are part of your mindfile. Your search histories, clicked selections and online purchases, if saved, are part of your mindfile. Your digital life is your mindfile.
Gordon Bell, a computer pioneer, has been digitally documenting every aspect of his life for years. He wears a device around his neck that photographs his surroundings every time there is a change, logs his GPS coordinates and records his voice and certain medical parameters. His entire mindfile is accreting at the rate of about one gigabyte per month. In 2010 a gigabyte of memory costs less than a dollar, so an entire lifetime mindfile costs less than a month’s rent in most apartments.

Most people do not want all of their life going into a mindfile. But virtually everyone wants some of their life mindfiled. Common sense says to safely store your precious photos in a server elsewhere rather than risk their loss in a plastic photo album. Lists of friends and dates are so much more convenient stored digitally than on scraps of paper. So long as the digital reflections of our lives cannot be used against us or to annoy us – such as by the government or advertisers -- we are happy to let an ever-larger mindfile of us accumulate.

Your mindfile is accumulating regardless of your awareness of it. A reasonable estimate is that people send or answer a few hundred emails a month, excluding spam. In addition, we all regularly make at least a dozen or so online searches, purchases, and banking transactions. Some of us share a photo a day; others of us perhaps five a month. Over the course of a decade, these thousands of emails and other digital samples of your behavior create a mindfile more detailed than the most researched biography. An expert team would know you almost as well as you know yourself if they had this mindfile to peruse. They could predict what you would probably do, how you would likely react and whom you might be thinking about. From your mindfile, they would have your profile.

Your mindfile leads to your profile in large part because we all live in a cultural context. We all share a large body of common knowledge with those who live in our same place, or have our same job, or are part of one of our social networks. If you live in LA, you know what freeways are, and you hate getting stuck on them. This is true for you even if you never mentioned it in your blog. But if you liked freeways, there would be evidence of that oddity in your uploads into your mindfile, such as a text or twitter message. Hence, piggy-backed onto our mindfiles are vast assemblages of common cultural information.

Now it is certainly the case that much of the information that would be in our mindfile is continually erased. Text messages are rarely stored, search engine companies have been pressured to erase identifiable information, and some people declare email bankruptcy by simply deleting all their messages in exchange for a fresh start. On the other hand, much more information is accreting to our mindfile than is being erased. We store lifetimes of information on flashdrives, memory sticks, laptops, external hard drives and distant “cloud” computer server farms. Our mindfiles may be as scattered as our brains, but they are there just the same. Were we motivated, we could merge into a master mindfile the digital reflections of our lives scattered across dozens of devices and websites.

Organizations are now forming to hoover-up our dispersed digitalia. Numerous photo-sharing and video-sharing sites provide us the opportunity to upload, organize and comment upon our imagery. Social networking sites enable more photo and video uploading, as well as running conversations with friends and connections to different sub-networks of interests that define our life. Blogging companies have digitally immortalized the ‘dear diary’ journal that is so essential to biographers’ efforts to determine the personality and motivations of their subjects. Companies such as Apple and Google offer us the option to co-locate or back-up all of the above mindfiles in their safe ‘computing cloud’ – a mindfile on a magic carpet ride.

Finally, there are organizations specifically devoted to helping people create a single coherent digital back-up of their mind. These purposeful mindfiles, at websites such as glogger.net, lifenaut.com and cyberev.org, handle not only photos, video, friends, and journals, but also psychological tests, lists of favorites and other personality profile tools. Why would anyone want to back-up their entire mind, as opposed to simply saving their favorite pictures, movies and conversations? There are at least five different kinds of motivations.

For some the reason is to create a kind of living memorial of themselves, for the benefit of children, grandchildren, and friends. These purposeful mindfile websites offer a customizable avatar (animated image), combined with a “chatbot” (conversational software program), that uses all of the information uploaded about a person to chat online the way the creator would chat if he or she were online. The customizable avatars even give the same kind of facial expressions and mannerisms as would their human creator. These mindfile websites allow someone to say “I was here” with the best tools that consumer technology has to offer.

A second reason people use mindfile websites is that they simply enjoy the creative process of making a digital replica of themselves. Rather like scrapbooking on steroids, mindfile creation is an artistic hobby centered on your own life. The goal of the endeavor is for your mindfile-based avatar or chatbot to be the most realistic one about, the one able to win praise from other mindfile aficionados and perhaps even contest awards. The mindfile websites offer an array of personality tests, conversational learning tools and memory repositories so that the mindfile hobbyist can create an ever-more realistic cybernetic portrait.

Third, mindfile websites are being marketed to busy people as email screening, web crawling and online shopping tools. Once you create your mindfile on these sites, and set its parameters, it can begin screening and even answering your email, very much as you would personally. In a similar fashion your mindfile can handle other virtual tasks for you without anyone being aware (or caring) that they are dealing with your cyberspace agent rather than your self. The more time you spend building up your mindfile agent, the more useful it will be to you.

Fourth, there are the gloggers. These are committed believers in sousveillance, the practice of streaming the video of one’s every waking moment to a massive social networking site for gloggers everywhere. Sousveillance entails everyone watching everything, a horizontal and thus democratic form of digital monitoring. It is quite unlike surveillance, which involves “Big Brother” watching everyone else, as is the case with most CCTV and security monitoring systems. Gloggers generally wear souped-up glasses (or goggles) with built-in audio-video recording capability that sends whatever it is you see and hear to your mobile phone or a hard drive, from which it is transmitted onward to the glogger.mobi website.

It is argued that everyone will be safer, and freer, in a sousveillance society. Unfortunately, one of its pioneers, Prof. Steven Mann of the University of Toronto, has faced numerous legal challenges to his insistence on keeping his goggle-based video running in public lavatories, police stations and other camera-unfriendly spaces. In his view this amounts to discrimination against the differently abled, which in his case is being wedded to a cybernetic appendage. Clearly, though, gloggers have the most extensive mindfiles.

Finally, geek futurists are motivated to use mindfile websites. These (mostly) guys realize that intelligent avatars are the next wave. They are early-adopters who want to be among the first people to sport a software agent that looks, acts and even thinks just like they do. They realize that software which actually thinks like a human – known as mindware – is not yet available. However, geeks can tell by the trends in software capability that mindware will be here soon. Mindfile development and testing is as close as we can get to the real thing today. It is like toying with personal computer building kits in the 1970s before Apple and other companies sold consumer desktops in the 1980s.

It should be noted that it takes no more effort than a daily hour in the gym to create a purposeful mindfile more reflective of you than the best biography. For example, in one hour a day, over a period of five years, you would have 2000 hours of your life on video or 100,000 uploaded and described photos. A leading social scientist, William Sims Bainbridge, has created over 100,000 online questions, and associated psychometric analytical software, that he believes represents a person’s entire general set of feelings, beliefs, attitudes and values. Each question asks how positively or negatively you feel about a topic, and how important that topic is to you. Completing just 50 of these a day – about an hour’s effort at most – would complete them all in five years. A daily mindfile workout might consist of a short video, a few uploaded photos and a few Bainbridge questions. After a decade or so, your mindfile would be quite complete. Alternatively, you will get to pretty much the same place if you are a regular online social networker. Its just like the difference between people who stay fit with a machine-driven routine and others who do so with regular pick-up games.

So, we are all creating voluminous mindfiles, albeit haphazardly, unintentionally and dispersed among IT companies. Some of us are centralizing our mindfiles, such as with a single provider of cloud computing services. A few of us are focusing on making our mindfiles as true to our minds as possible. This can be done with online personality profile and avatar training tools. It is a revolutionary development that much of the content of most people’s minds is being saved outside of their bodies. Even more fundamental is the prospect that these mindfiles can, with mindware under development, be used as the basis for recreating the mind from which they came.
Posted by Martine Rothblatt at 4:22 PM